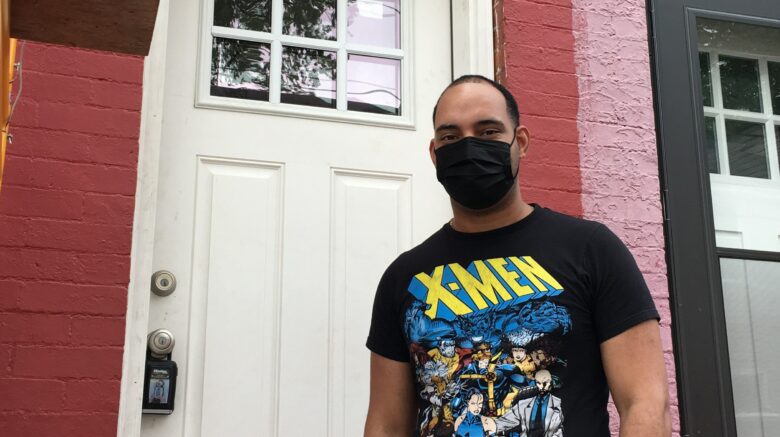 Written by Joan Kern, for LNP and Lancasteronline

Even when Denny Valerio’s work week is through, the hard work continues.

In the meantime, Valerio 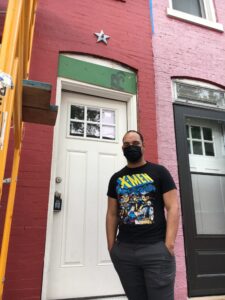 and his daughters live with his mother, Bertha Valerio, stepfather, Basilio Castro, and four other relatives in a house nearby on Highland Avenue, where there aren’t enough beds and only one bathroom.

For the past year, he has spent most of his days off helping to renovate his future house in the 400 block of East Strawberry Street for himself and his two daughters, Davina, 5, and Dayanara, 11. They hope to move in by June, when the house — underwritten by Lancaster Lebanon Habitat for Humanity and Thrivent Financial — will be dedicated at a celebration, perhaps on the porch because of the pandemic.

Born in the Dominican Republic, Valerio, 29, grew up in New York City and moved in 2007 to Lancaster, where Castro had visited relatives and fell in love with the peacefulness.

He heard about Habitat by word of mouth. The nonprofit, at 443 Fairview Ave., “helps families build and improve places to call home, (believing that) affordable housing plays a critical role in strong and stable communities.”

“When Denny came to us, he said, ‘I want you to know I wouldn’t let you down,’ ” says Andrew Szalay, executive director of Habitat. “He was very excited to hook up with us.”

It has also been a great learning experience for him.

“They’re teaching me things I’m going to need in my future home,” he says, “including dry walling, electrical and plumbing skills and making simple repairs.”

From disrepair to desirable home

The little brick row house on the corner of Strawberry and Locust streets near South Queen Street was abandoned for about seven years, abused by squatters, damaged by a vehicle and condemned for its deplorable condition. Now, it has all new windows and doors and a new side balcony. New drywall and floors are underway.

When complete, there will be a new kitchen, dining room and living room, with three bedrooms and a bathroom on the second floor.

Through a partnership with Whirlpool Corp., the home will include a new stove, dishwasher and refrigerator, with a washer and dryer in the basement.

“I’ve seen people cry when they saw the washer and dryer,” Szalay says. “Sometimes they don’t know they will have them.”

Years ago, the yard behind the house was sold to the neighbors, but Habitat is in the process of buying it back so the girls can have a yard to play in.

Amy Balestier, Habitat director of development and communications, says typically 100 to 200 volunteers complete a project in about 2,500 hours.

“Volunteers are a big part of making a house a home,” Balestier says.

Many volunteers are clients or employees of Thrivent Financial. Rick Baldwin, Thrivent’s mid-Atlantic region engagement leader, said the Christian nonprofit has given $267 million to Habitat for Humanity branches around the world for “Faith Builds,” matching up to 50% of the cost of a home through challenge grants.

Balestier says Habitat has two projects in Lancaster — on Howard Street now and on South Lime Street when the Strawberry Street home is completed.

“Over the course of 2020, more than 13,000 volunteer hours were contributed,” Balestier says. “For us, during the pandemic, that’s a big deal. It’s not that much different from 2019. Volunteers really came out in a big way. We put a lot of restrictions in place to keep people safe. … It allowed us to continue our volunteer program. Volunteers are critical to keep moving forward, critical to building affordable homes.”

Matt Tingler, Habitat construction manager, says COVID-19 affected the size of their volunteer workforce. About 60 skilled volunteers who have worked with the organization on past projects decided to wait before returning to a job site, he says.

“It’s building back up,” Tingler says. “I’m hopeful because there are people excited to learn new skills. … We make sure everyone is comfortable, make sure nobody is pressured.”

“He’s hustling,” she says. “He is an example of the process for homeownership. We serve individuals with lower to moderate income, about 40% to 80% of the area median income. For a family of four, the standard in Lancaster County is $31,800 to $63,600. Denny qualifies.”

The application process has three requirements: “The ability to pay but still have financial need; a willingness to partner with Habitat by contributing 250 to 400 hours of sweat equity and attending classes, such as English as a second language and on maintaining and financing a home; and the need for a safe, warm, dry and affordable home, priced at fair market value with a 20- to 30-year mortgage of $700 to $1,000 per month.”

Also, the application must be submitted on time, and the future homeowner must be approved for sweat equity. Denny, as a single head of household, must complete 250 hours of sweat equity before he can move into his house, within nine months to a year. He can also work on other houses or volunteer at Habitat’s ReStore, at 155 Independence Court. The application process can take three months.

“It has the sophistication of a regular bank with a full analysis of what they can afford, but with the heart of a nonprofit,” Wells says.

Wells said Habitat bought the Strawberry Street house from the Redevelopment Authority of the City of Lancaster for about $15,000. She estimates it will be worth $135,000 when renovations are complete.

“We underwrite a zero percent interest mortgage, with all buyers paying taxes and insurance,” Wells says.

Wells says she gets at least one inquiry a day.

“The need is immense,” Wells says.

Balestier said Habitat has helped over 300 households through

homeownership and repairs since its inception in 1986.

Wells said Valerio’s file was presented to a community of volunteers for review and to determine if he met the requirements. She said he picked the Strawberry Street house.

Wells says the biggest myth about Habitat, one that she fights all the time, is that houses are just handed to people.

“That’s wrong in so many ways,” she says. “It’s a process that takes at least one year. It’s not a solution for an emergency situation. Our whole objective is generational change.

“I’ve seen stress melt away overnight when someone moves into a stable house,” Wells says. “It’s opening the door to wealth building … to trying to build a better future. … If you have to rent, you’re never going to compound wealth.

“People interpret (Habitat clients) as not deserving, but they are working hard and they deserve it,” Wells says. “That’s what we’re trying to do, to provide the opportunity to earn the stability they need in the form of home ownership.”