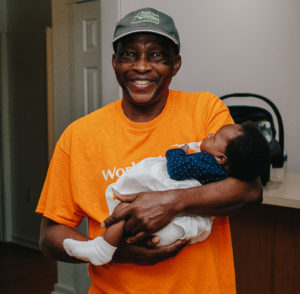 Each family’s journey to Habitat homeownership is special in its own way. And the Kaberamanzi Family’s journey is no exception. In fact, their story is one that exemplifies that when community, commitment and faith come together, amazing things can happen.

The family’s story is told through Marie Claire, the daughter of soon-to-be homebuyer Jean Kaberamanzi. Originally from Democratic Republic of the Congo, Marie Claire was around 4 years old when her family escaped the war of her country. Her earliest memory of “home” was the bush, where her family hid from the violence. Home then became a refugee camp in Zambia, which had its own dangers. In fact, despite her desire to educate her children, Marie Claire’s mother would not send her or her other children to school for fear of their safety.

It was Marie Claire’s mother, however, who fell to violence. She was killed a few years after the family moved to Lusaka, the capital city of Zambia, where she believed her application for the family’s refugee status would be processed more quickly.

It took many years, but the family was finally approved and relocated in 2015 to Lancaster, a place that has been dubbed the “refugee capital of America” by the BBC. The younger children entered school, but Marie Claire was initially turned away from the local high school, having been told she was already 18 and too old to enter school. Determined to get her high school diploma, Marie Claire asked for a chance and promised to work hard. She was granted that chance and not only worked hard, but excelled.

Marie Claire is currently in her third year at Washington Adventist University, where she is studying to be a nurse. She works several jobs to pay for her tuition. She is also an ambassador for the Malala Foundation, an organization that advocates for the education of girls worldwide. Education was very important to her mother, and that gives Marie Claire the strength to keep working hard.

A strong work ethic and sense of determination is a quality that each family member seems to share. Jean works seven days a week at a local chicken farm; this is the best he can do, as his English is not very strong. Their rent for a small home is very high, $1200 per month. Marie Claire worries about her father’s stress. Despite working hard, and maintaining a positive attitude that can only be described as inspirational, he often must make tough decisions when paying it comes time to pay the bills.

The Kaberamanzi Family entered Habitat’s homeownership program 2017. The home they are purchasing in Lancaster’s Southwest neighborhood will have a lower mortgage payment than what they currently are paying for their overcrowded, substandard rental.

When Jean is asked what he thinks of when he thinks of home, he says “family.” He smiles as he describes how his children and his grandchildren will visit him for many years … how they will come home. For Marie Claire, she thinks about how happy her dad will be knowing that his home is his own.

“I can look at my dad and know that this place belongs to him,” she said. “I know he will be very happy, and that’s all that matters.”

Please stay tuned for future information about the Kaberamanzi’s home dedication, the special occasion to celebrate their achievement of homeownership and the day that they will move into their Habitat home. Marie Claire’s story will be in Malala’s second book ” I Am Displaced,” coming out in January 2019.