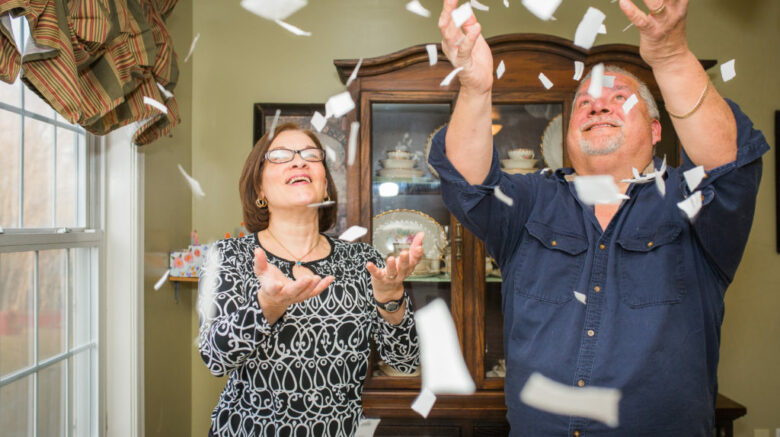 Robert and Evelyn recently celebrated a milestone… after twenty years living in their Habitat home on Lancaster’s Euclid Street, the couple just paid off their mortgage.

“I feel about a hundred pounds lighter,” Robert joked. “It’s a big weight off of our shoulders.”

Robert and Evelyn are originally from New York City; Robert from East New York, Brooklyn and Evelyn from Harlem. The city they remember was a violent one. Robert witnessed his first murder at the age of 7 while riding a city bus with his mother. Evelyn said that her first husband died by gunfire, while her second fell to drug overdose.

When the two married and blended their families, they agreed that NYC was no place to raise a family. So they moved to Lancaster.

On the weekends, Robert and Evelyn would take the kids on drives through Lancaster to look at the big homes. He promised them that they one day would own a home. “It won’t be as big as these,” he said. “but it will be ours.”

The couple applied for Habitat’s homeownership program but weren’t optimistic about being accepted. Evelyn explained that they had a bad credit score. “I had never written a check before,” she said. “I never had a bank account.”

She locked herself in her bedroom one day to pray that they were accepted into the homeownership program. “We believe in prayer,” she said. She warned her children not to interrupt her. When she heard a knock, she told her child to “go away. I’m praying.”

“But mom,” replied the small voice on the other side of the door. “It’s Habitat.”

They were overjoyed with the good news. Evelyn recalls her happiest moment was the realization she’s have a washer and dryer. Taking kids and loads of laundry to the laundromat was not an easy feat. “We were always scrounging for change for the machines; we had no money,” she recalled.

Robert’s goal was to make sure his children worked hard and had a chance for a better life. “My goal for my children was to do better than I do. We were successful in that.”

Robert also insisted, upon moving to Lancaster, that Evelyn work. She had come from generations of welfare, and he wanted to be sure that she could support the family if something ever happened to him; welfare was not an option. “You have to work for what you want,” he said.

Today, their children are all successful in their careers. Their older son is a Director at a local hospital, while their daughter is an RN, studying to become a doctor (the first in the family). The other daughter and son are a consultant and bartender, respectively.

Congratulations to Robert and Evelyn. They made their own dreams of homeownership, and everything that followed, come true.