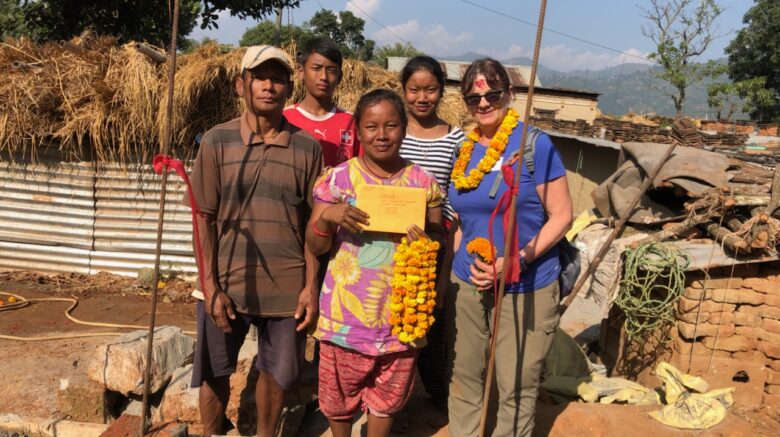 Volunteers are the heartbeat of Habitat… both locally and abroad. Habitat is active in 70 countries around the world and offers building experiences in 30 of those locations through its Global Village program.

One of our own construction volunteers, Carolyn Haskell, is a Global Village veteran, having built in Fiji, Thailand (where she participated in the Jimmy and Rosalynn Carter Work Project to build 82 homes), and, most recently, Nepal.

For two weeks this past fall, 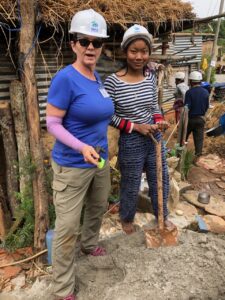 Carolyn joined 22 other Habitat volunteers in Nepal to build a home for a family who lost everything in the 2015 earthquake, a historic and deadly disaster that left hundreds of thousands homeless. The family, who worked alongside the crew, has been living in a 100 square foot metal shed since the quake.

“The work was very strenuous,” said Carolyn, who layered rock, concrete, mud and rebar for the home’s foundation, which a separate Habitat crew group would later build the home upon. “But there was work for everyone, no matter what their age or ability. All could contribute in a meaningful way.”

Carolyn and her crew were welcomed by the family and others in the village with leis and bouquets of marigolds. She noticed that despite not having much, everyone was always positive and smiling. She worked alongside the family’s oldest daughter and son, who was jokingly referred to as “The Boss.”

She recalled a special moment when her crew had the chance to leave the family messages on clay hearts that would be embedded in the home’s foundation, similar to our own local tradition of signing wall studs at home builds and renovations. She wished the family happiness, love and health.

In the little down time she had, Carolyn hiked to Buddhist and Hindu temples, ate local food and visited Kathmandu.

Carolyn is already considering the possibilities for her next trip. The experience “gives you hope for the world,” she says.

“Every day is a gift from God to enjoy and to do something positive,” she says of her unwavering hope. “I seek to do both each day.”