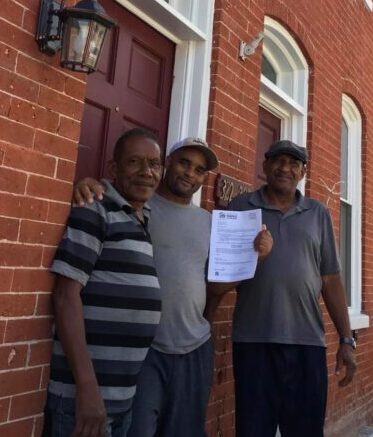 There are important milestones to recognize on the journey to homeownership through Habitat. One of the most exciting is the day that an individual or family is matched with their future Habitat home.

Future Habitat homeowner Jose recently met his match on South Christian Street in Lancaster. Accompanied by his father, he climbed the steps to his front door and walked inside for a tour of the renovations in progress. His soon-to-be neighbor Mariano, also a Habitat homeowner, and a relatively new one, came out to greet him to the neighborhood with a warm handshake.

Homeowners can select their future Habitat home from those we have available after completing 100 hours of their sweat equity requirements. For many, this is the moment that their dream of homeownership becomes very clear. A homeowner can see him/herself cooking dinner in their kitchen. They can visualize their children riding a bike through their new neighborhood. Some families start to plan where their furniture will go.

One mother, who moved in to her Lancaster home with her family several years ago, stood in her future and empty dining room, indicating where her table would go. “This is where my family will eat together. We’ve never done that before. We’ve never had enough room for a table.”

While Jose still has work to complete before celebrating more big moments, like his Home Dedication, move-in day, and settlement, he has the time to work alongside volunteers on his own home on South Christian Street. His work, and his visions, will make his house a home.