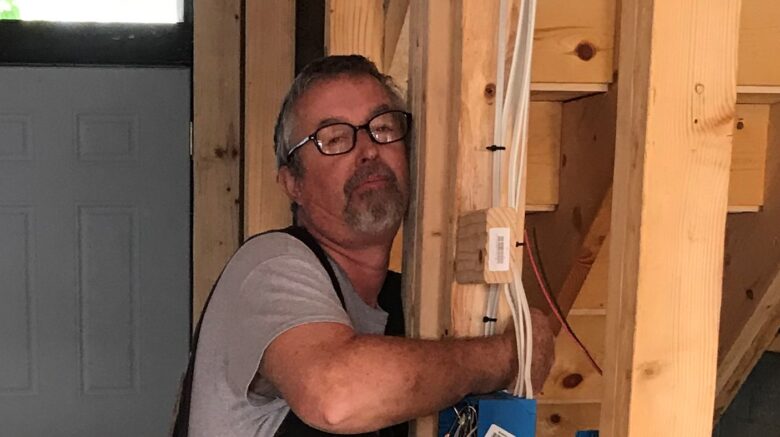 “I have never made a cent as an electrician” is not something you hear every day from a master electrician. But Habitat volunteer—and master electrician–Les Sechrist stated this fact when detailing the services he has donated to local nonprofits, including our very own Cumberland Build in Lebanon.

“I’ve never had a business; I only work with nonprofits,” he explained. “They provide materials, I do the work for free.”

Les has saved our Cumberland Build approximately $30,000 in electrical expenses. When pressed, he calculates that this year alone, he has saved nonprofits in the Harrisburg and Lebanon area upwards of $100,000 by donating his time and talents. The money Habitat has saved through Les’s generosity allows our organization to put the funds toward our next home building project.

Les pursued the trade following his retirement as a Lieutenant from the Coast Guard, where he served for 21 years. Upon retirement, he started to volunteer with Harrisburg’s Habitat affiliate and within a few years became its site supervisor in 2005 through the AmeriCorps program. Shortly thereafter, he began to take courses at HACC in electrical studies.

Les shared his story from our Cumberland Build site, where he was working alone on a warm Tuesday in November. He was starting the electrical rough-in for the second of the three future Habitat homes located at the gateway to Downtown Lebanon. He has worked on a number of building projects with our Director of Construction, John Neumann, and says of their partnership, “We make a good team.”

Over the years, Les has also lent his services to hurricane relief efforts, having travelled to disaster sites in Mississippi, Georgia and North Carolina. He finds where help is needed and joins the building teams who come in after the first responders. “I just need a place to lay down and store my gear,” he said.

He’s a great teacher, and eager to share his skills with others less experienced on a construction site. It gives him a sense of satisfaction, just as building a home does. “It’s just my nature,” he says, then adds with a laugh, “or maybe I just like to talk too much.”

Volunteers are the heartbeat of Habitat. The donated labor that our volunteers provide helps us to keep costs down and homes affordable. No matter what your skill level, there’s a place for you on our work sites. Please see our volunteer page to learn more about getting involved!